Cornelius C. Beekman, "Beek" to his friends and bank associates, was born January 27, 1828, in Dundee, Yates County, New York to Benjamin B. Beekman and Lydia Compton Beekman. He attended public school in Yates County and lived there until 1850 when he left New York to seek his fortune in the Great American West. Upon his arrival in San Francisco, he worked as a carpenter but by 1853, he was carrying gold dust, parcels and letters for Cram, Rogers and Co. on the stage line between Jacksonville, Oregon, and Yreka and Crescent City, California. Soon he began his own express company over the same route. On his next step up the career ladder, "Beek" became the Jacksonville agent for the California and Oregon Stage Company in 1860 but gave this up to become a Wells Fargo Express agent in 1863. He continued with that agency until 1905. In, 1857, he entered the banking business with the Beekman Bank in Jacksonville. Beekman married Julia Elizabeth Hoffman on January 29, 1861. Together they raised three children: Benjamin B (08/03/1863-1945), Carrie C. (1865-1959) and Lydia (1867-1873). Beekman ran for the office Oregon governor as a Republican but lost to William Thayer by fewer than 70 votes. In 1883, he was one of four local men who deeded property along Bear Creek to the California and Oregon Railroad for a terminal and town site of what later became Medford, Oregon. By 1913, "Beek" was a proponent of a highway over the Siskiyou Mountains. He also served as a regent for the University of Oregon. 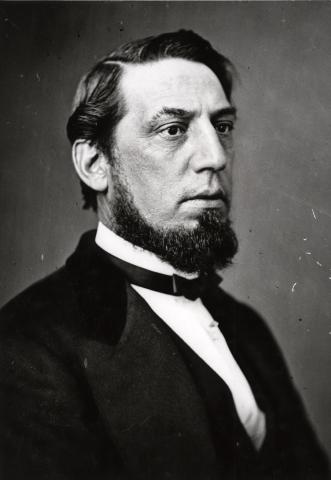