Pinto Colvig, born Vance DeBar Colvig, August 11, 1892 in Jacksonville, Oregon, was one of seven children of "Judge" William Mason Colvig (1845 - 1936) and Adelaide Birdseye Colvig (1856 - 1912). Although Pinto attended but did not graduate from Medford High School, he was accepted at Oregon Agricultural College, where he took art classes and played clarinet in the band.
Colvig was an entertainer.  In 1913, he briefly worked the Pantages vaudeville circuit, leaving to join the Al G. Barnes Circus for part of a season as a clarinetist in the circus band. In 1914 he worked as a newspaper cartoonist in Reno, Nevada and later in Carson City, leaving that job to again play clarinet for Barnes for part of the 1915 circus season.
After marrying Margaret Bourke Slavin (1892 - 1950) in 1916, Pinto lived in San Francisco, where four of their five sons were born. The fifth son was born in Los Angeles.
In San Francisco, Colvig worked with Byington Ford and Benjamin Thackston "Tack" Knight at the Animated Film Corp., a company which produced animated cartoons years before Walt Disney. In 1916 the partnership produced "Creation," claimed to be the world's first feature-length cartoon. In 1919, Pinto produced "Pinto's Prizma Comedy Review," recognized as the first color cartoon. The cartoon, like all of Pinto's pre-Hollywood animation production, is now considered lost.
Pinto and his family moved to Hollywood in 1922, where he worked as a title writer, animator and comedian on silent comedies and early sound cartoons.
In 1930, Pinto signed an eight-year contract with Walt Disney. In addition to working on cartoon stories and characterizations, Pinto created sound effects for cartoons and provided voices for Disney characters Goofy, Pluto, Grumpy and Sleepy. Pinto also wrote the lyrics for “Who’s Afraid of the Big Bad Wolf” and "The World Owes Me a Living."
After leaving Disney Pinto provided voices and sound effects for radio programs, including "Amos 'n Andy" and "The Jack Benny Show," where he supplied the sounds made by Benny's "Maxwell" car. When the fictional Maxwell was "donated" to a WWII scrap drive, Pinto voiced Leona, the equally fictional horse that replaced it. In 1939 he lived in Florida to work on Max Fleischer Studios' "Gulliver's Travels" and "Popeye."
In 1946 Pinto went to work for Capitol Records and the "Bozo" legend began. Under the direction of Capitol executive Larry Harmon, and inspired by the lack of good albums for his own five children, Pinto created a storybook and record combination. It was a huge success that seems to have combined all of Pinto's extraordinary talents and made him a household name for generations. Pinto was the first to bring Bozo to radio and television, beginning in 1948.
Pinto’s wife Margaret died in 1950. He married Mrs. Peggy Bernice Allaire, 43, in January 1952.
A lifelong smoker who died of lung cancer on October 3, 1967, at age 75, Colvig was an early advocate for warning labels about cancer risk on cigarette packages in the United States. He was interred at Holy Cross Cemetery in Woodland Hills, CA.
Colvig was the father of the Hollywood character actor Vance Colvig, who died on March 3, 1991. 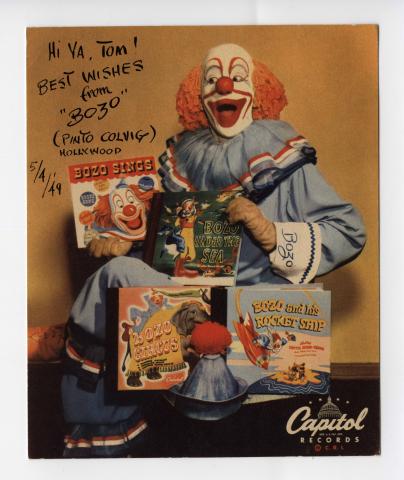