Bennett spent his childhood in Medford, Oregon, the youngest of four children in a musical family. He played the piano and pump organ by ear, and took violin lessons. At the University of Oregon, Bennett studied music, but he also painted in his free time. During Bennett's service in the Navy, from 1943 to 1946, he continued to paint, and he decided to attend the Art Institute of Chicago. By 1954 he had received his bachelors and masters degrees from the Art Institute, and he taught there, and at New Trier High School.

In 1954 Bennett moved to Italy and traveled to France. When he returned to Chicago in 1955, his works were shown in various exhibitions, and in 1957 the Art Institute awarded him the Renaissance Prize for Cathedral Forms. Although he was successful in Chicago, Bennett decided to return to Oregon.

Bennett taught classes in a home he had designed and built on Grape Street in Medford, and in 1959 he established the Rogue Valley Art Association, which opened the Rogue Gallery. Bennett purchased the Eagle Brewery Saloon in Jacksonville 1962 and converted it to his home and studio, where he continued to teach, paint, sculpt, build, draw and create collages.

Source: Wikipedia, Eugene Bennett (artist) The SOHS Archives include Eugene Bennett's photos, sketches, documents and other materials. Photos of his art works are also included.  The Inventory is searchable on this website.  The collection includes slides, but they probably are not covered by the online inventory. Click to view the print slide inventory. 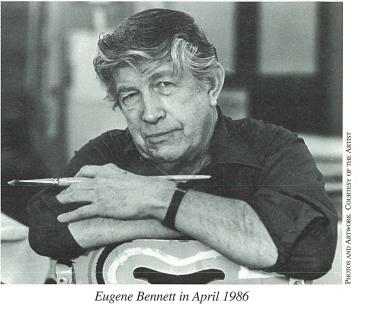