Jesse Applegate was born to Daniel and Rachel Lindsey Applegate July 5, 1811 in Kentucky. He is important to southern Oregon history as the founder of the small town of Yoncalla and as one of the men who blazed the Applegate Trail through the Rogue Valley. He was also a legislator, a school teacher, a diplomat with the Indians and the British Hudson's Bay Company, a campaigner for Abraham Lincoln, a member of Oregon's provisional government and a surveyor with the Oregon & California Railroad. He was educated at the Rock Creek Seminary in Shiloh, Illinois.
Applegate married Cynthia Ann Parker March 13, 1831, and they had a large family that included Edward, Gertrude, Peter, Daniel, Alexander, William, Henry, Robert, Sarah, Rozelle, Milburn, Ellen and Flora. In 1843, Applegate joined one of the first large wagon trains to Oregon with his family and 100 head of cattle. He served as captain for half the train. Toward the end of the trip, at a set of rapids on the Columbia River, one of Applegate's sons was swept off a raft and drowned. His death seemed to be the impetus for the Applegate brothers search for a way into Oregon that would avoid the turbulent and dangerous river. In 1844, Jesse homesteaded on a claim near Dallas, Ore. and in 1845 was elected to the 13-member legislative council of the Oregon territorial government and became known as a "true founder of Oregon's pioneer government." He handled negotiations between the Hudson's Bay Company and the Indians during this time.
In 1846, along with his brother Lindsay, he established the Applegate Trail which left Fort Hall in modern-day Idaho, traversed the Black Rock Desert of Nevada and entered Oregon near Goose Lake. From there the trail came through the southern Cascades and Siskiyou Mountains to the Rogue Valley, where it turned north to the Willamette Valley. In 1851, Applegate founded the town of Yoncalla, Oregon. During the Rogue River Indian Wars in 1855-1856, Applegate raised volunteers. Later, he fought for Oregon to be admitted to the Union as a non-slavery state. During his lifetime, Jesse remained close to his brother and was a friend of Wilson Price Hunt, founder of the city of Astoria, of Jedediah Smith of the Rocky Mountain Fur Company, and Edward Bates, a member of Lincoln's cabinet. Jesse Applegate died April 22, 1888.
Sources: Oregonian: April 25, 1965; University of Oregon Bulletin, "Jesse Applegate" February, Vol 9, No. 6 by Joseph Schafer. 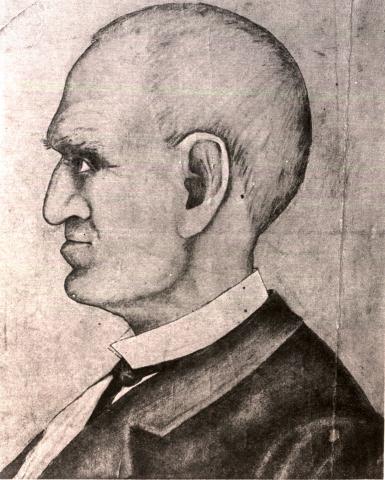