When Peter Britt was born in Obstalden in the Swiss canton of Glarus, his family farmed land that had been in the family for centuries. Earning a living there as an itinerant portrait artist was difficult, but Peter pursued this until 1845, when he immigrated to the United States with his father Jacob Kaspar Britt, his brother Kaspar, and Kaspar's family.[1] They settled with other Swiss emigres inHighland, Illinois. Portrait artists of the time were faced with competition from daguerreotype photographers, so Britt studied this new technology with John H. Fitzgibbon [2] in St. Louis. Although Britt apparently opened his own studio in Highland in 1847 and operated it for five years, Miller could find no records to support that claim.[3]

Perhaps gold fever, perhaps just wanderlust, took Peter Britt from Illinois to Oregon in 1852, following the completion of his naturalization process. Britt left Illinois with John Hug and two other Swiss men. Britt was the captain of the group, John was the wagon master, and the group made it to Grande Ronde Valley before the men insisted on no longer dealing with Britt's 300 pounds of photographic equipment. John Hug split the wagon into two halves. At The Dalles, Oregon, John Hug and Britt chose an overland route to Portland, while the other two men chose the Columbia River route and arrived in [[Portland just 24 hours later. Finally, Britt, hearing news of the gold mining strike in Table Rock City (now Jacksonville, Oregon), left Portland alone for southern Oregon. According to Miller he arrived with the two-wheeled cart, a yoke of oxen, a mule, and five dollars.[4]

Britt built a log cabin in Jacksonville in November 1852, on land where he lived for the rest of his life. (this log cabin no longer exists, but Southern Oregon University archeologists have recently determined the site of the cabin.[5])

Although Peter Britt brought his photographic equipment all the way from Illinois to Oregon, and immediately opened a Daguerreian Gallery in his log cabin, he also tried gold mining and mule packing in order to earn money. Altogether, Britt was successful enough to send money back to his brother Kaspar in Illinois, build a frame house in 1854, give up the dangerous mule packing business in 1856 to concentrate on his photography business, and expand his home in 1859.

According to Miller, Britt knew his future wife, Amalia Grob, in Switzerland, but her father would not allow them to marry because Peter Britt's occupation as an itinerant artist was too tenuous. Instead, Amalia married a relative, Kaspar Grob. Britt's brother Kaspar did marry Amalia's sister, though. When Mr. Grob died in 1861, Kaspar Britt contacted Peter. Miller states that Peter immediately sent Amalia funds to return to Switzerland if she wished, or to travel to Oregon and marry him. With her young son Jacob, Amalia traveled to New Orleans and around the Horn to San Francisco, then by steamer to Crescent City and finally by stage to the Applegate stop. Peter Britt met her there and they were married.

Prior to Amalia's death in 1871, she and Peter had three children of their own, Emil, Arnold (who died as an infant) and Amalia Dorothea, known as Mollie. Emil, who also became a photographer, and Mollie remained in the Britt home their entire lives. 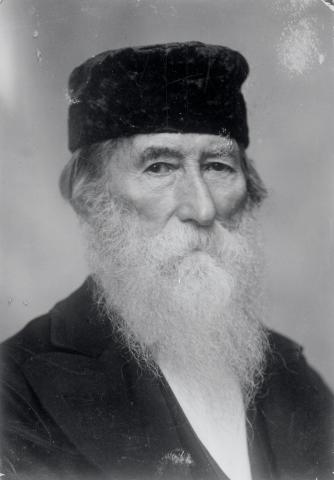