The young DeAutremont brothers and especially Ray felt they were born into a family that had been victimized by a corrupt society. It seemed only fair they follow a course of crime rather than work for a living. Studying opportunities, they decided to be train robbers and selected as their first target the southbound Southern Pacific Train No. 13, the San Francisco Express. Ray had heard rumors that on October 11, 1923, the train would carry a heavy shipment of gold, to be used in meeting payrolls. Also attractive was the railroad's requirement to stop and test brake systems at rail line summits. Train No. 13 had to test its brakes at the tiny train station of Siskiyou near the entrance of long Tunnel No. 13. A bad omen in the numbers! Roy and Hugh swung aboard the slow-moving train and ordered the engine crew to stop. When the mail clerk refused to open the mail car's door, the DeAutremonts blew it open with dynamite. Using far too much, they incinerated the car and mail clerk inside. There was nothing of much value in the car. Not sure what to do next, the brothers decided to kill the 4 trainmen who could identify them - engineer Syd Bates, fireman Marvin Seng, brakeman Charles Coyl Johnson and mail clerk Elvyn Dougherty. The assassinations were quick and brutal. The killers realized all was lost and headed for the Siskiyou woods to hide for several days and avoid posses. Traveling at night and staying out of site, the three snuck out of the Siskiyous and into northern California where they separated and went their own ways to avoid suspicion. What followed with wanted circulars posted around the world was probably the most intense manhunt ever. The posters were effective: Hugh was detected and arrested while serving in the army in the Philippines in February 1927. Ray and Roy reunited and traveled to Ohio where they adopted aliases Elmer (Ray) and Clarance Goodwin. Ray married 17-year-old Hazel to add to his disguise. Again, wanted posters did their job, and the twins were captured in Steubenville OH in March 1927 and extradited to Jacksonville OR where Hugh was now being tried on four counts of murder and several of interfering with a mail train. Heinous crime these capital murders were, public sentiment of string 'em up! was moderating, and prosecution and defense began bargaining to spare Hugh's life. Agreement was reached just about the time the twins reached Jacksonville from Steubenville - if Hugh would confess, the penalty would be life in prison, not death. Eager to save their lives, Ray and Roy sought this same deal. On June 24, 1927, the three murderous DeAutremonts were manacled and taken by train to the Oregon State Penitentiary in Salem. To be nearer her boys, mother Belle sold her store and home in New Mexico and bought a boarding house in Salem, just down the street from the penitentiary. In the pen, Hugh and Ray made the best of life and gained respect from many inside and outside prison walls. Hugh learned the printing arts, took correspondence courses from the University of Oregon in Eugene and edited and published the penitentiary newsletter Shadows. Through interesting dealings, he was paroled in 1958 and preparing to meet a fiancé who had worked with him in printing for years. Smoking and cancer caught up with him: he died in the San Francisco veterans' hospital just weeks after leaving prison walls. Roy did not adjust well to prison life. At first, he returned to barbering, his profession of youth, but then he became combative and a danger to his cell mate Ray and to others. He was admitted to the Oregon State Mental Hospital and given a frontal lobotomy in (1949). The procedure was not as successful as hoped - he calmed right down but became pretty much a vegetable. No longer a threat, he was paroled in 1983 and moved to a foster care home. He died in 1983. Ray, usually regarded the ringleader of the DeAutremont criminals, was paroled in 1958 and lived - arguably - a contributory life thereafter. The moral to the story? Ray argued that life is predestined. As much as he might regret his ghastly crime, fate prevented his living any other way. Many argue that there is no predestination - we all have alternatives to select and choices to make. Brother Verne and half-brother Charles (Chuck) lived successful, contributory lives. Even the DeAutrements' name suggests this: in French, it means the other mountain. 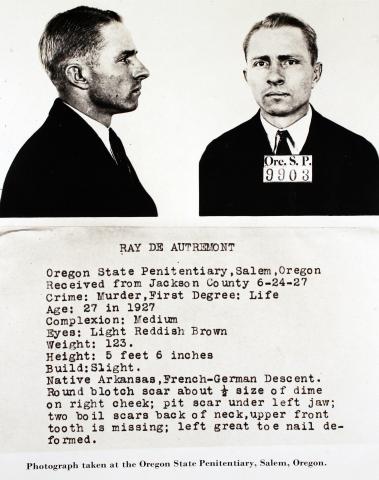