In 1933, Rose Maddox and her family walked/hopped freight trains from Alabama to California. Once they arrived they lived briefly in unused sewer pipes, then tents.
In 1937, Rose & brothers began entertaining around Modesto, CA, as The Maddox Brothers and Rose. They won a contest for hillbilly music at the California State Fair for their daily unpaid radio show in Sacramento, CA. Their exuberant musical style, known as Okie Boogie, influenced country music and to some extent rock and roll. After Rose's brothers returned from WWII they were one of the west coast's hottest country acts.  In 1949, they were on Grand Ole Opry. In 1951, they recorded with Columbia records, and from 1952 - 54, they were on Louisiana Hayride radio shows. They toured 100,000 miles in a fleet of Cadillacs. The group disbanded in 1956, and in 1958, Don bought a ranch on the north side of Ashland, where Lulu (mother), Cal, and Rose all died. "Maddox Revolution Angus" can still be seen on his big barn. From 1959, to her death Rose was a highly successful solo act. She enjoyed popularity in the 1970s and 80s, even in Europe.
Sources:
Rose Maddox, Sweetheart of Hillbilly Swing, by Charlie Seeman, Table Rock Sentinel, V13, No 2. Mar/Apr 1993.An authorized biography: "Rambling Rose, the life and career of Rose Maddox" by Jenny Whiteside. Country Music Foundation Press/ Vanderbilt University Press.
MMT, May 1997.
VF - Maddox. Queen of the West, by Evan Cutler. Countryside Magazine . 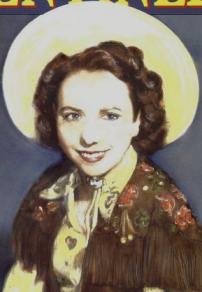