Grace Russell Fountain grew up in Ashland, Oregon the second of eleven children. Her mother and Father were Anne Hill and James Russell, who were stone-carvers. She attended Ashland schools and the Ashland Academy. After she married James Fountain, an Ashland merchant, and had two children, she took up art. She painted landscapes, especially of Western Mountains and Crater Lake. One painting accompanied a story by Joaquin Miller in Sept. 1904, sunset magazine. Her mentor was painter William S. Parrott. Moving to Portland in the 1890's she had a studio and taught art to women. After 1906 the family moved to Oakland, California and a sympathetic art colony. They remained life-long friends of Joaquin Miller and lived on or near his property. Grace Fountain continued painting well into her 70's and died in1942 in Oakland. Her sister Mabel was also a landscape artist who remained in Ashland. The sisters remained close and visited often. Source: "Grace Russell Fountain: Her Life & Art, 1858-1942" By Gail Evans-Hatch publ. 2013 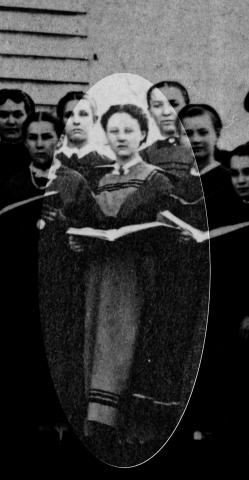