Born in Gothenburg, Sweden on October 18, 1867 came to the United States with his parent in 1872. His parents settled in Wisconsin and his father took up farming. After an extensive education career that took him from Wisconsin, to Indiana, to Chicago, Illinois, Swedenburg began to search for his own place to settle, eventually selecting Ashland, Oregon. Once there, he worked as a health officer in Ashland for thirteen years, and then became the chief surgeon and helped to establish the Granite City Hospital. He married Olive Esther Eggleston in 1906, and they had two daughters.
Swedenburg was known not only for his skill as a surgeon and active community member, he is said to have had "the best library in Southern Oregon." He also owned sixty acres of land on which he grew pears and apples, spending a lot of time outdoors. In one particularly interesting surgical case, Dr. Swedenburg planned to graft bone and tissue from a dog onto the severely injured leg of a young boy, Jim Curry, who had been hitchhiking or riding the rails south. Later, in November 1917, Swedenburg was arrested for transporting alcohol into dry territory. However, he plead guilty and claimed that the alcohol was to be used in his hospital. Swedenburg paid a $25 fine and received a suspended sentence.
Dr. Swedenburg died unexpectedly in Gothenburg, Sweden on July 31, 1937 while on a trip with his wife and two daughters. He had unintentionally swallowed a small bone en route to Sweden, and once there, he sought medical attention only to find that the ingested bone had perforated his esophagus and an abcess had formed. One report citing correspondence from Swedenburg's wife suggested that he also developed gangrene in his lung as a result of this accident. Either way, Swedenburg, such a skilled surgeon and pillar of the Ashland community, came to rest in the place where he was born 69 years later.
Many years later, in 1966, the beautiful colonial-style home that Swedenburg built at 990 Siskiyou Blvd in Ashland and in which the family entertained guests frequently, was ordered condemned with a number of adjacent vacant lots. The State Board of Higher Education and Southern Oregon College bought the land in order to create a Fine Arts Center. The home was considered a "pioneer home," and its significance within the community was recognized. Swedenburg was posthumously given recognition as an important figure in the Ashland community at the September 7, 1937 City Council meeting. His work as a physician and as an acive member of various community organizations incuding the Jackson County Medical Society, the Southern Oregon Medical Society, the Oregon State Medical Association, the Elks, and the Masons shows just a portion of how active he was. 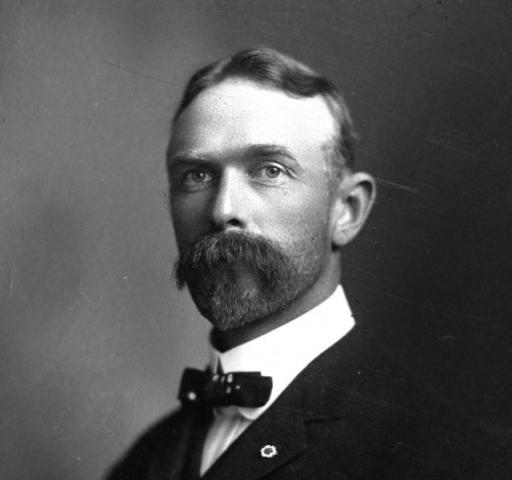